At this point, we assume you have read our Text Search Tutorial and accomplished the following steps.

We are now going to show you how to create a dataset that joins relevance information from the MS MARCO dataset with ranking features from Vespa to enable you to train ML models to improve your application. More specifically, you will accomplish the following steps in this tutorial.

Vespa’s rank feature set contains a large set of low and high level features. Those features are useful to understand the behavior of your app and to improve your ranking function.

To access the default set of ranking features, set the query parameter ranking.listFeatures to true. For example, below is the body of a post request that in a query, selects the bm25 ranking-profile developed in our previous tutorial and returns the rank features associated with each of the results returned.

The list of rank features that are returned by default can change in the future - the current list can be checked in the system test. For the request specified by the body above we get the following (edited) json back. Each result will contain a field called rankfeatures containing the set of default ranking features:

If instead of returning the complete set of rank features you want to select specific ones, you can add a new ranking-profile (let’s call it collect_rank_features) to our msmarco.sd schema definition and disable the default ranking features by adding ignore-default-rank-features to the new ranking-profile. In addition, we can specify the desired features within the rank-features element. In the example below we explicitly configured Vespa to only return bm25(title), bm25(body), nativeRank(title) and nativeRank(body).

Note that using all available ranking features comes with computional cost as Vespa needs to calculate all these features. Using many features is usually only advisable using second phase ranking, see phased ranking with Vespa.

The random global feature is explained in the Rank Feature Reference documentation and will be useful in the next section when we describe our data collection process.

The MS MARCO dataset described in the previous tutorial provides us with more than 300 000 training queries, each of which is associated with a specific document id that is relevant to the query. In this section we want to combine the information contained in the pairs (query, relevant_id) with the information available in the Vespa ranking features to create a dataset that can be used to train ML models to improve the ranking function of our msmarco text app.

Before we move on to describe the collection process in detail, we want to point out that the whole process can be replicated by the following call to the data collection script collect_training_data.py available in this tutorial repository:

The following routine requires that you have downloaded the full dataset.

The command above use data contained in the query (msmarco-doctrain-queries.tsv.gz) and in the relevance (msmarco-doctrain-qrels.tsv.gz) files that are part of the MSMARCO dataset, and send queries to Vespa using the collect_rank_features ranking-profile defined in the previous section in order to request 99 randomly selected documents for each query in addition to the relevant document associated with the query. All the data from the request are then parsed and stored in the output folder, which is chosen to be data in this case.

Since we want to improve the first-phase ranking function of our application, our goal here is to create a dataset that will be used to train models that will generalize well when used in the first-phase ranking of an actual Vespa instance running against possibly unseen queries and documents. This might be obvious at first but turns out to be easy to neglect when making some data collection decisions.

The logic behind the collect_training_data.py can be summarized by the pseudo-code below:

For each query, we first send a request to Vespa to get the relevant document associated with the query. If the relevant document is matched by the query, Vespa will return it, and we will expand the number of documents associated with the query by sending a second request to Vespa. The second request asks Vespa to return a number of random documents sampled from the set of documents that were matched by the query. We then parse the hits returned by Vespa and organize the data into a tabular form containing the rank features and the binary variable indicating if the query-document pair is relevant or not.

We are only interested in collecting documents that are matched by the query because those are the documents that would be presented to the first-phase model in a production environment. This means that we will likely leave some queries that contain information about relevant documents out of the collected dataset, but it will create a dataset that are closer to our stated goal. In other words, the dataset we collect is conditional on our match criteria.

The first Vespa request is contained in the function call get_relevant_hit(query, rank_profile, relevant_id) where the query parameter contains the desired query string, rank_profile is set to the collect_rank_features defined earlier and relevant_id is the document id that is said to be relevant to that specific query.

The body of the request is given by:

where the yql and userQuery parameters instruct Vespa to return the id of the documents along with the selected rankfeatures defined in the collect_rank_features rank-profile. The hits parameter is set to 1 because we know there are only one relevant id for each query, so we set Vespa to return only one document in the result set. The recall parameter allow us to specify the exact document id we want to retrieve.

Note that the parameter recall only works if the document is matched by the query, which is exactly the behavior we want in this case.

The second Vespa request happens when we want to extend the dataset by adding randomly selected documents from the matched set. The request is contained in the function call get_random_hits(query, rank_profile, number_random_sample) where the only new parameter is number_random_sample, which specify how many documents we should sample from the matched set.

The body of the request is given by

where the only changes with respect to the get_relevant_hit is that we no longer need to use the recall parameter and that we set the number of hits returned by Vespa to be equal to number_random_sample.

Remember we had configured the second phase to use random scoring:

Using random as our second-phase ranking function ensures that the top documents returned by Vespa are randomly selected from the set of documents that were matched by the query.

Once we have both the relevant and the random documents associated with a given query, we parse the Vespa result and store it in a file with the following format:

where the values in the relevant column are equal to 1 if document docid is relevant to the query qid and zero otherwise.

In the process of writing this tutorial and creating the data collection logic described above, we found it useful to develop a data collection sanity-check to help us catch bugs in our process. There is no unique right answer here, but our proposal is to use the dataset to train a model using the same features and functional form used by the baseline you want to improve upon. If the dataset is well-built and contains useful information about the task you are interested in, you should be able to get results at least as good as the one obtained by your baseline on a separate test set.

In our case, the baseline is the ranking function used in our previous tutorial:

Therefore, our sanity-check model will be a linear model containing only the two features above, i.e. a + b * bm25(title) + c * bm25(body), where a, band c should be learned by using our collected dataset.

We split our dataset into training and validation sets, train the linear model and evaluate it on the validation dataset. We then expect the difference observed in the collected validation set between the model and the baseline to be similar to the difference observed on a running instance of Vespa when applied to an independent test set. In addition, we expect that the trained model to do at least as good as the baseline on a test set, given that the baseline model is contained in the set of possible trained models and is recovered when a=0, b=1 and c=1.

This is a simple procedure, but it did catch some bugs while we were writing this tutorial. For example, at one point we forgot to include

in our collect_rank_features rank-profile leading to a biased dataset where the negative examples were actually quite relevant to the query. The trained model did well on the validation set, but failed miserably on the test set when deployed to Vespa. This showed us that our dataset probably had a different distribution than what was observed on a running Vespa instance and led us to investigate and catch the bug.

The most straightforward way to train the linear model mentioned in the previous section would be to use a vanilla logistic regression, since our target variable relevant is binary. The most commonly used loss function in this case (binary cross-entropy) is referred to as a pointwise loss function in the LTR literature, as it does not take the relative order of documents into account. However, as we described in the previous tutorial, the metric that we want to optimize in this case is the Mean Reciprocal Rank (MRR). The MRR is affected by the relative order of the relevance we assign to the list of documents generated by a query and not by their absolute magnitudes. This disconnect between the characteristics of the loss function and the metric of interest might lead to suboptimal results.

For ranking search results, it is preferable to use a listwise loss function when training our linear model, which takes the entire ranked list into consideration when updating the model parameters. To illustrate this, we trained linear models using the TF-Ranking framework. The framework is built on top of TensorFlow and allow us to specify pointwise, pairwise and listwise loss functions, among other things. The following script was used to generate the results below (just remember to increase the number of training steps when using the script).

The two rank-profile’s below are obtained by training the linear model with a pointwise (sigmoid cross-entropy) and listwise (softmax cross-entropy) loss functions, respectively:

The figure below shows how frequently (over more than 5.000 test queries) those two ranking functions allocate the relevant document between the 1st and 10th position of the list of documents returned by Vespa. Although there is not a huge difference between those models on average, we can clearly see in the figure below that a model based on a listwise loss function allocate more documents in the first two positions of the ranked list when compared to the pointwise model: 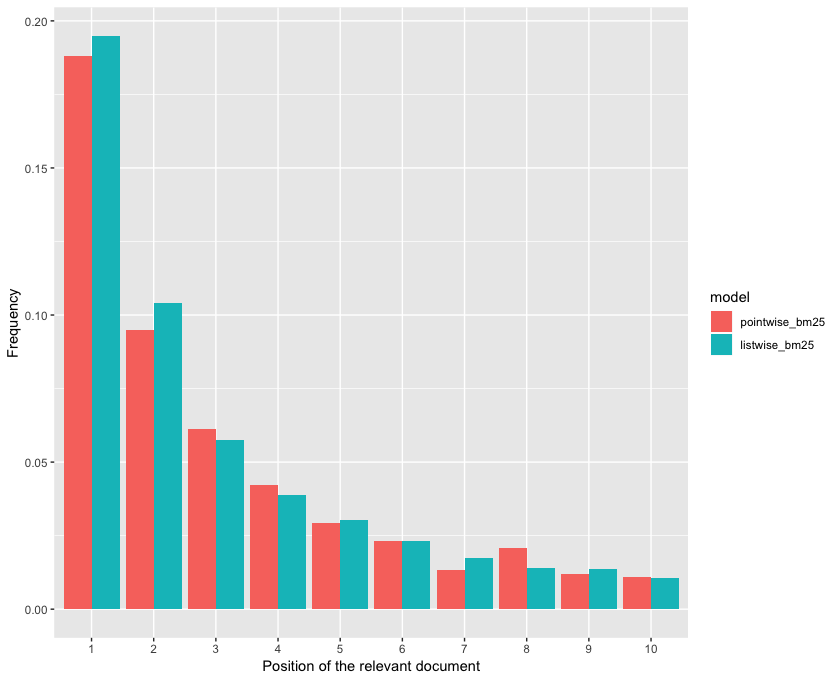 Overall, on average, there is not much difference between those models (with respect to MRR), which was expected given the simplicity of the models described here. The point was simply to point out the importance of choosing better loss functions when dealing with LTR tasks and to give a quick start for those who want to give it a shot in their own applications. We expect the difference in MRR between pointwise and listwise loss functions to increase as we move on to more complex models.

In this tutorial we have looked at using a simple linear ranking function. Vespa integrates with several popular machine learning libraries which can be used for Machine Learned Ranking: